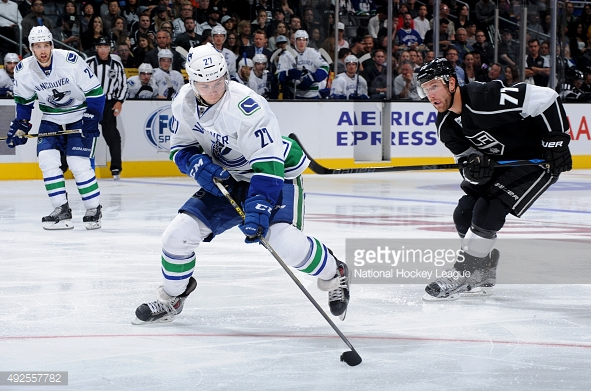 Posted on October 18, 2015 by hockeypdocast Posted in ArticlesTagged Articles

As a hockey community, there’s no denying that we’ve come a long way over the past couple of years in our ability to evaluate the on-ice product. The advancement of possession metrics in that time has provided us with a more nuanced and sustainable way to differentiate between what’s important and what’s ultimately just background noise.

Still, the issues of variance that arise from both the sport’s chaotic nature and its team concept persist. For a hockey team to be successful it needs to be a well-oiled machine that has all of its parts moving in unison. Which means that even though we have something like WOWYs (With-Or-Without-You) at our disposal, it’s still tough to specifically nail down how much of a given sequence is attributable to one specific person.

That’s especially true for defencemen, who don’t necessarily even have the benefit of something as rudimentary as point production to truly prove their worth. Low-event defencemen who don’t happen to register notable counting stats yet manage to set the table for their forwards still tend to fly under the radar in most instances.

This is why I’ve decided to partake in a tracking project this season which will focus on how defencemen impact the neutral zone, both in terms of defending their own blueline and quarterbacking the attack going the other way. Building on the foundational work done by Corey Sznajder and others in the past, as the year goes along I intend on posting updates for not only the Canucks but also all 29 other teams (to provide league-wide context).

Below is an early season introduction.

It’s worth noting that all of the data above was compiled during 5v5 play. As well, Yannick Weber’s sample size is especially low, what with him having only actually appeared in one game thus far. Generally speaking, most of this data should be taken with a grain of salt. While it can help explain certain outcomes to-date and provide us with trends to follow as the season goes along, the numbers themselves are obviously quite susceptible to extremes in either direction. One particularly good or bad attempt and everything gets thrown out of whack.

Before turning the raw data into percentages for the sake of clarity, I had each zone exit attempt broken into 6 possible outcomes: Carry-Out, Pass-Out, Clear, Dump-Out (distinguishing itself from a simple clear if the same team retains possession), Failed Exit, and Icing.

While getting the puck out of harm’s way is a bare bones goal for a defenceman, you’d hope that he’d have the wherewithal (and requisite skill) to do something more with the puck than just aimlessly flinging out of the zone. To steal and adapt a line from the great Kent Wilson: “clearing the puck out of the zone is like killing rats. Doing it is preferable to not, but if you’re doing it all of the time it suggests you have bigger problems.”

A slick puck-moving defenceman can serve as the team’s quarterback, setting up his forwards by putting the puck into locations that allow them to do their job and score some goals. One player in particular that has stuck out as a shining star in this regard has been Ben Hutton, who early in his career has thrived in passing the puck out of the zone and hitting his target. His 19 successful passes in exiting the defensive zone are only behind Alex Edler’s whopping 25 (in just 3 games, no less) amongst defencemen on the team.

A perfect example of his prowess came during the season opener when he registered his first career point by assisting on Jannik Hansen’s goal. It was more than just the crisp tape-to-tape pass; his ability to gather the loose puck in his own zone and quickly move his feet to establish a better passing lane are two components of the play that shouldn’t be overlooked:

While a successful outlet pass is the most efficient manner in making a play – if only because of the puck’s ability to move faster than any one individual player – it’s not the only way in which a defenceman can help tilt the territorial battle in his team’s favour. Matt Bartkowski is living proof of that, with a handful of scintillating rushes under his belt already. His 10 personal carry-outs are twice as many as anyone else on the team (the aforementioned Hutton has five, himself) through four games. His desire to create a play with his legs has gotten him into trouble on a couple of occasions, but I’d say it’s ultimately been a net gain thus far:

There are those two approaches, and then there’s whatever Luca Sbisa has been doing. It’s not necessarily surprising, but yet somehow it’s still startling to see just how limited he is with the puck on his stick. I’ll be surprised if he’s not one of the worst 5-10 defensemen in the entire league at getting the puck out of his own zone effectively come season’s end. Unfortunately, that’s hardly where his issues end.

Same caveats as the ones touched on in the section above here, as well. The question of quality of competition when it comes to defending the blueline is a dicey one. On the one hand, it would make intuitive sense that a better, more skilled player would be more likely to attack a defenceman head-on with the puck than a 4th liner whose one task is to get the puck deep and throw a hit.

The issue with that is that it’s really not always the case. In limited tracking throughout the league thus far, there are plenty of top line players that have already established themselves as ones that opt for the dump-and-chase route. It’s quite possible that it’s ultimately a tactical decision that comes from the head coach down, depending on preference.

With that out of the way, I think the numbers above are awfully illuminating in helping explain the defensive struggles for the Hamhuis-Bartkowski pairing thus far. There has been consternation expressed regarding their play by fans of the team, and justly so. They’ve been amongst the league’s worst as suppressing shotsthrough 4 games. Given what we know about the effects of zone entries as it relates to shot generation, the rate at which they’re bleeding attempts against makes sense. Bartkowski, in particular, has ironically fallen victim to what his best skill is going the other way. While they’ve only been on the ice for one goal against, if they keep being hammered by the opposition as badly as they have been the end results will eventually catch up to them.

And finally, it’s worth noting the excellence of the Tanev-Edler duo, who have been every bit the top pairing the team is asking them to be this season.