What happened to Connor McDavid in Tuesday night’s game against the Flyers was a real punch to the gut. And that’s coming from someone who has doesn’t have anything resembling any ties or allegiances to the Edmonton Oilers franchise. Purely as a fan of hockey, it’s nothing short of regrettable that we’re going to be deprived of seeing and enjoying someone who has instantly become one of the most fun players in the league to watch for at least a couple of months.

While making ‘Auston Matthews to Edmonton’ jokes is low hanging fruit, I wouldn’t say that it’s all doom and gloom for the Oilers just yet. There’s still undoubtedly legitimate question marks surrounding their ability to keep the puck out of their own net, especially now that it’ll presumably be in their control less frequently without one of their best possession players around. And unless Leon Draisaitl can effectively transition out from his cushy role as the top line’s right winger and into a second reliable pivot for them, the options down the middle beyond Nugent-Hopkins leave a lot to be desired.

But that top line is so, so very good and maybe now that the blindingly bright light emanating from McDavid’s presence is temporarily out of the picture, Taylor Hall will get the recognition that his dynamite play warrants.

Hall’s individual case fascinates me. Obviously coming into the league as the first overall pick in the fabled ‘Taylor vs. Tyler’ class instantly put sky high expectations on him right from the jump. It’s always tough to truly gauge people’s beliefs on things like this, but from my various interactions there appears to be a distinct segment of the population that believes Hall has been something of a disappointment to date. That the team’s continuous struggles and lack of winning since he joined the team reflect poorly on him. After all, shouldn’t a player you’re selecting with that first overall pick completely change the course of his franchise around?

I’ve been personally trying to combat that sort of thought process for some time now. While trying to look for silver linings after news of McDavid’s injury timeline broke the other night, I had this exchange on Twitter which I figured was worth expanding on: 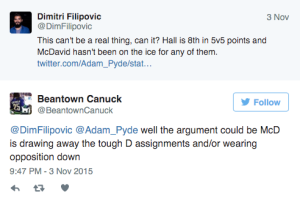 It certainly makes for a great story, one which I’m not surprised certain people have been trying to weave. The problem is that there doesn’t really appear to be any sort of tangible evidence out there to support these notions.

The fact of the matter is that Taylor Hall had elevated himself into that super elite tier of left wingers long before McDavid arrived in Edmonton. Look at the list of names he’s associated with in terms of 5v5 scoring since his sophomore season back in ’11:

For whatever it’s worth, his production wasn’t much different with the man advantage. During that same stretch of time he has been near the top of the league in both point production and shot generation on the power play.

I think there’s also something to be said for the general offensive burden Hall has been having to shoulder by himself. While Individual Point Percentage (IPP) is a stat that can be misleading in smaller samples, I’m willing to believe a trend which has been snowballing for the ~3,500 minutes of 5v5 time Hall has played means something.

His 86.1% IPP – which in essence means that he has factored into 86.1% of his team’s goals scored while he has been on the ice – is the highest in the league during that time. Without going back and looking into every single one of those goals individually, it feels safe to generalize that Hall’s imprints have been on a large majority of what the Oilers have been able to produce over those four seasons.

This isn’t to take anything away from McDavid’s initial impact in the league, because it has certainly been significant in its own right. Despite a relatively slow start in his first couple of games, he’s still in the top-20 of NHL scoring for the year and was producing at a point-per-game before getting hurt. His 50.38% score-adjusted possession rate was one of the best on the team, and he had drawn three more penalties than he had taken. He’d also chauffeured Nail Yakupov to the best stretch of his career — of Yakupov’s 10 points this season, only two of them weren’t either finished or assisted by McDavid. I imagine the sailing won’t be as smooth for the likes of Yakupov and fellow linemate Benoit Pouliot without McDavid’s playmaking and speed around to set the table for them. How quickly he was able to adjust and assert himself onto the NHL level is a testament for how high the ceiling is for him moving forward.

It just seems like a stretch to superimpose that impact onto Hall’s early season success. Of the nine points in the 198 or so 5v5 minutes that Hall has produced this season, McDavid has only factored into one of those goals and shared the ice with him for just 22 of those minutes. If anything, it has been the Hall and Nugent-Hopkins – who has somewhat quietly been progressing into that second-from-the-top tier of pivots since sometime last season – combination that has been lighting the world on fire for the Oilers.

While the idea of McDavid drawing attention away from them is a good one in principle, it has actually been that aforementioned top line that has been routinely going up against the toughest competition the opposition has to offer. In that time all they’ve been doing is controlling nearly 54% of all shot attempts and 64% of all goals.

The presence of a legitimate second scoring line surely helped grease the skids and make the Oilers a tougher team to go up against for opponents. The mark of a good team is possessing the ability to come at the opposition in relentless waves, without much let-up. But given the sample size stretching back a couple of years now to supplement what we’ve seen in this young season, I think Taylor Hall will be just fine in the absence of Connor McDavid. Whether the Oilers themselves will be as a team is a whole other question.