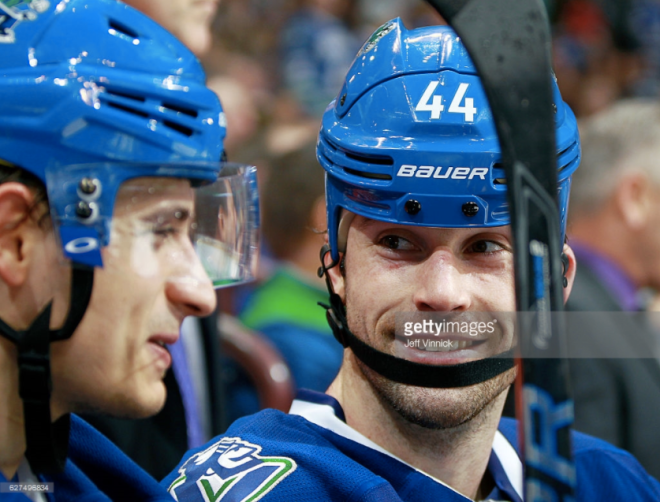 Posted on January 12, 2017 by hockeypdocast Posted in Articles

When you spend years listening to hockey-speak, being able to sniff out the pertinent clues that are hiding somewhere in the middle of all of the cliche-filled nonsense becomes a necessary skill.

Whenever you hear someone making a concerted effort to bring the discussion about a specific player back to their supposed character and intangibles, it’s a pretty clear sign they’re reaching because they don’t actually have anything concretely positive to say about them.

I’ll use Jim Benning here as an example because he makes it easy to do so, but the reality is that you could probably go through all 29 other teams and conduct a strikingly similar exercise:

In a vacuum, these individual traits are beneficial. All things being equal, of course you’d rather have them than not. After all, despite all of the grandeur that comes with it, at the root of it all an NHL locker room is like any other workplace. There’s different personalities interacting with one another, and whether they mesh or clash can theoretically have a direct impact on the type of work that’s churned out on a day-to-day basis.

The tricky thing about that, though, is that it’s a classic ‘chicken or the egg’ dilemma, in that it’s tough to distinguish whether winning or culture comes first.

You can have a room full of affable players that all get along with one another, but if they’re constantly losing games and failing at their job I’d imagine the vibe in the room would turn pretty quickly. On the other hand, it’s amazing how well a group can gel and come together when things are going well for the team and they’re winning games.

The major difference: it’s a lot easier to assemble a collection of good hockey players that’ll win games and eventually get along because of it than it is to magically turn a bunch of great guys who unfortunately also have a distinct lack of talent into a successful hockey club.

From a cold, calculated player and team evaluation standpoint all we really care about are goals. Sometimes it’s easy to lose sight of that because we spend so much time obsessing over shot metrics, but it’s important to remember that the only reason we do that is because they’ve been shown to be the best predictor of future goals.

That’s it. That’s all that really matters. How or why it’s accomplished is ultimately irrelevant, because as we’ve seen there’s a number of different ways to do it.

In Erik Gudbranson’s case, for as much as his teammates and employers seem to enjoy his presence, it hasn’t seemed to manifest itself into on-ice results. He’s been a drag on his team’s 5-on-5 performance for essentially every single year he’s spent in the NHL. His team gives up a larger share of the shot attempts, shots on goal, scoring chances, and goals whenever he’s on the ice vs. off of it.

What that should tell us is that there’s something else in his game that’s more negatively impactful, drowning out all of the good stuff.

He has a big body and has been known to use it as a weapon when throwing checks, but does it really matter if he’s a) too slow to catch most players and/or b) taking himself out of defensive position when trying to do so?

He disrupts plays with his stick and courageously gets in the way of shot attempts, but does it really matter if he’s just going to immediately proceed to give the puck away off of the boards and have to do it all over again?

These are the sorts of questions that we should be asking ourselves whenever there’s such a glaring disparity between the individual skills that register with our eyes, and what the data about what they’re doing with it is telling us.

After all, traits like size, speed, physicality, and even character, are all just single inputs that feed into the larger overall package.