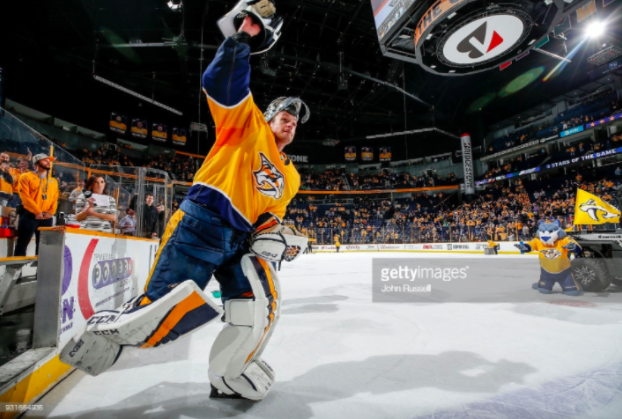 The glaring issues with the current 82 game structure of the NHL regular season are inescapable. Hockey is a game that inflicts a tremendous amount of wear and tear on the body (both physically and mentally), and no matter how many resources teams invest in the field of sports science it’ll still inevitably take its toll eventually.

Whether it’s the most optimal way for the NHL to go about doing its business is a very reasonable question to ask. Injuries are an unavoidable reality, but it’d presumably be in the league’s best interest to do everything it could to ensure that its best players are able to stay on the ice and perform at their highest levels as often as possible. Unfortunately that’s isn’t something that’s likely to change anytime soon; the reason people get and stay rich is because they aren’t in the business of throwing easy money away.

The schedule isn’t all bad. One of the positives about it being more of a marathon than a sprint is that it allows for different storylines and trends to slowly materialize and develop over time. That in turn provides us as observers with an opportunity to change the way we think about certain players and teams along the way.

Something you quickly come to learn after doing this job for a while is that a lot of this stuff is very fluid, which makes adaptability an invaluable skill. Regardless of what happens on that given night, the next day there will always be new games on. It’s then up to you to cleanse your palate, and get ready to soak up all of that new information as it presents itself, so that you can use it to recalibrate your opinions accordingly.

Another important realization is that I’ve long since given up on the belief that we’re always going to get everything right. I’ve only been in the game for a couple of years now, but I already wish I had a nickel for every time I’d written or said something coming from a perfectly well reasoned and informed place, only to have it nearly immediately wind up blowing back up in my face. It can happen for any number of reasons. Players unexpectedly get better or worse all the time. Injuries occur. The puck randomly bounces a certain way. Goalies get hot, winning games (and playoff series) for a team that had no business doing so.

As analysts we don’t typically cheer for particular players or teams (except when it’s your favourite team that’s in question, because then we’re definitely cheering against them), as much as we cheer from cool stories and for our takes to be proven correct. Part of that comes with having your fandom sucked out of you after getting a peek behind the curtain at how the sausage is made, but part of that is also coming from a place of self-preservation. Much like a GM who keeps doubling down on players they invested high draft or trade capital in despite growing evidence that it’s time to cut bait, as analysts it’s obviously in our best interest to look as smart as possible as often as possible or people will eventually start tuning us out and going elsewhere.

Sometimes that type of bias can be just as subtly detrimental to the pursuit of objectivity as the more blatantly off-putting idea of a writer shilling for a team to maintain relationships. If you become too attached to anything in this field, you immediately call into question your position as a credible source of information. That includes previous beliefs that you may’ve had about a player you thought was either good or bad at a certain point in time.

In the pursuit of transparency and self-reflection on some of the stuff I’ve gotten most notably wrong this year, one particular thing that I’d like to revisit is the goaltending situation in Nashville. Starting at some point last season, I’d become one of the most vocal members of the growing contingent clamouring for the Predators to rely more heavily on Juuse Saros, who despite his youth and resulting lack of experience at this level, looked like he would present the team with the best chance to win.

Looking back at it, I still think it was a fair stance to take at the time based on what we knew. Much of the rationale stemmed from the fact that the two goalies in question seemed to be heading in polar opposite directions in their respective career. Whereas Saros’ trajectory appeared to have no real ceiling after having dominated at every single level on his way to this point, Rinne’s individual performance had been progressively eroding. Aside from a strong 2014-15 campaign, it’d really been since 2011-12 that he’d shown himself to be anything more than a league average netminder (with his advancing age and scary hip issues looming large).

This year has been a different story, as he’s been nothing short of spectacular in silencing his critics (myself included) and changing that narrative with each passing shutout performance. If you look at any goalie metric this season, chances are Rinne’s will appear atop the leaderboard. For a look at some of the more underlying stuff, my colleague Andrew Berkshire did a nice job of laying out the case for him already.

Of goalies that have played at least half of their team’s games thus far, no one has stopped a higher percentage of shots faced at five-on-five (.939, ahead of Sergei Bobrovsky’s .933). The same is true for overall save percentage (.931, just ahead of Marc-Andre Fleury’s .930). As is the case for shots coming from high danger areas (0.844, just ahead of Bobrovsky’s 0.843).

When it comes to evaluating goalie play, one of my favourite things to look at is Goals Saved Above Average. For those that are unfamiliar with the metric, it basically looks at what a league average goalie would’ve done under the same workload, and then compares the results. It’s obviously imprecise, but it paints a useful picture of what’s happened all things being equal. There’s been 11 goalies this year that have saved their team north of 10 goals more than a league average netminder would’ve, and Rinne’s been lapping the field by a stunning margin: 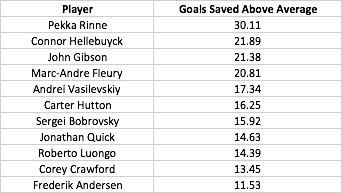 If we use Corsica’s version of Goals Saved Above Average (which is a better indicator because it accounts for shot quality, and not just raw volume), Rinne comes in at 3rd behind just behind Bobrovsky and John Gibson. It’s a stunning improvement at this point of his career for a guy that hadn’t come in as a net positive at any point over the past 6 years:

It feels like all of the discussions for individual awards this season are still wide open across the board, and that includes the Vezina Trophy. The goaltending position is always a weird one, but it feels like this year it’s as weird as it’s been in some time. Especially since most of the usual suspects that we’d consider for the award are out for a variety of reasons.

Henrik Lundqvist is still a stud, but he’s stuck behind an abomination of a team. Carey Price and Braden Holtby have been uncharacteristically bad (especially the latter, who has been healthy and playing on a winning team). I don’t know what happened to Cam Talbot and the Oilers, but he desperately needs a long summer of ice baths and relaxation. Marc-Andre Fleury and Roberto Luongo have been spectacular, but 41 and 28 starts respectively aren’t enough at this point. Corey Crawford was awesome while he was in net, but he had his season cut short.

By my count that leaves us with 5 logical candidates:

It’s worth noting that we’re talking about which goalie is having the best season here, and not who the best goalie is. That extends into the distinction between predictive and descriptive, with the latter being what the award is about (i.e. rewarding players for what’s already happened this year, not what’ll happen next year or in the years to come).

We’ll see how the final couple of weeks shake out, but there’s a very legitimate case to be made that by that rationale Pekka Rinne currently sits in the driver’s seat for the award based on what he’s accomplished this season. That’s a welcome development for both himself, and the Predators, as it looked like those days were in his rearview mirror.

I’ve advocated for Saros to eat up more of the starts. That’s honestly still probably the smart way to play it. But unlike in the past where it was because he looked like the better option in the present, now it has more to do with keeping an eye on the future. Both in terms of preparing Saros as the heir apparent, but also for making sure Rinne is fresh and capable of keeping up this level of play throughout another long postseason run.